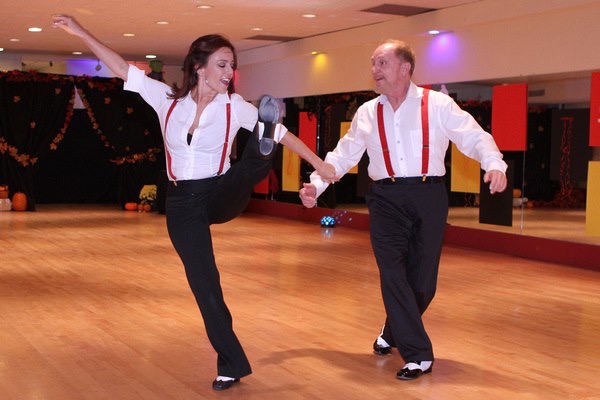 In our last blog we talked all about where our namesake, modern ballroom dancing, came from. But we are able to teach (and very happy to teach) a wide variety of dance styles. This week we’re going to take a quick look at some other dances you might run into at our dance studio: rumba, cha cha, and swing dancing.

Rumba is one of the hardest dances to pin down. The word means “party,” and over the years it has evolved from its Cuban roots into dozens of different styles across the world. We can offer a great introduction to many of these in our adult dance classes.

Add an “h” and you have a very specific style of dance called rhumba, aka ballroom rumba. It started in the United States in the 1930’s and combined Cuban rhythms with American big band music. It is best known as a slow-quick-quick pattern in a box step.

Also from Cuba, the cha-cha shares its name with the style of music played during the dance. It can be traced to early 1950’s Cuba, and when the specific rhythm of a cha-cha song is translated into dance, the feet make the familiar cha-cha-cha sounds. Simply think “one-two-cha-cha-cha” to yourself and you can probably hear the rhythm in your head, put there by a dance instructor in some movie or television show you saw years ago…the rhythm is just that catchy!

Jazz music might have influenced modern ballroom dancing, but it created swing dancing. Most swing dances came about in the African American communities of 1930’s New York. Swing encompasses hundreds of distinct dances, including the Lindy Hop, Collegiate Shag, Charleston, and Jitterbug.

Interested in learning any of these historical and incredibly fun dances? Contact Modern Ballroom Dance to find out when these dance classes for adults occur. We look forward to hearing from you!